2021 has proven to be a great year for the fine wine market, and the third quarter has been no exception.

September was a rough month for equities as the end of the third quarter neared.  The S&P 500 suffered its worst month since the start of the pandemic to close 4.8% down.  This was largely caused by a combination of rising interest rates stoked by inflation fears, along with concerns over China’s troubled property market.  Although mainstream markets felt the jitters, fine wine prices stood firm and continued to grow. 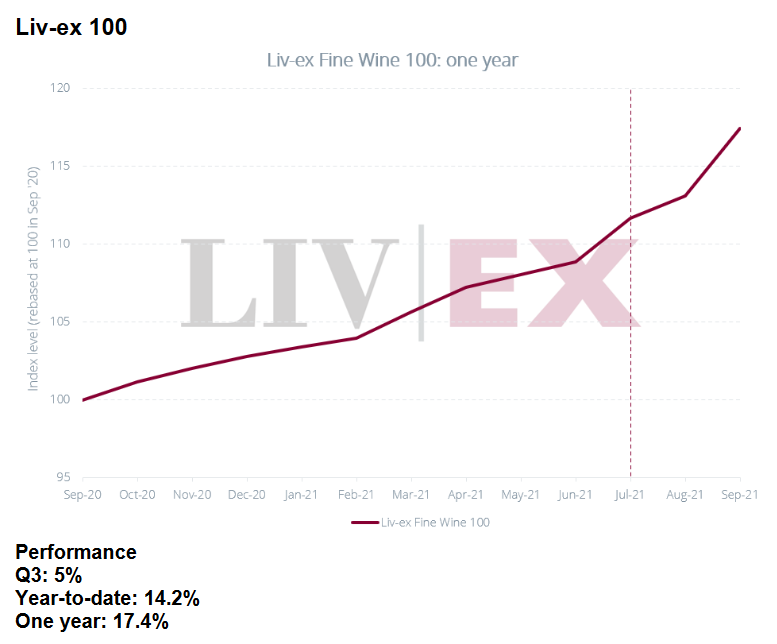 The fine wine market’s benchmark indices have recovered exceptionally well from the shock of Covid-19 in the first half of 2020 and have now either reached or are near record levels.  In September the Liv-ex 100 posted its eighth consecutive month of growth, gaining 3.8% to come within a hair’s breadth of its 2011 peak.

Wines of Bordeaux saw trade by value reduce in the last quarter, in contrast, Burgundy saw trade by value increase over the last two quarters. Champagne was the second-best performing region behind Burgundy and has generated some impressive short to medium-term returns for the early adopters among our clients. 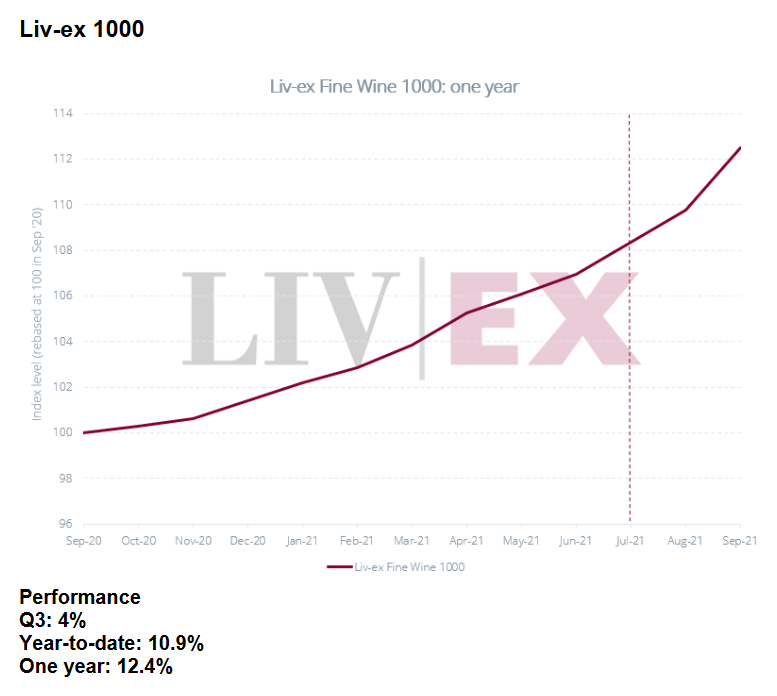 The Liv-ex 1000, the market’s broadest index which tracks the price performance of wines from the world’s leading wine-producing regions, gained 4% in the last quarter and is up 10.9% year-to-date. Following wines from California, Australia, Italy, Champagne and Rhone amongst others, this clearly demonstrates the ongoing shift in buying patterns over the last decade away from Bordeaux in favour of other regions.  This expansion of the market has helped to raise the index which now sits at an all-time high.

Burgundy remains the strongest performing region that contributes to the Liv-ex 1000, with no signs of waning.  Some may be put off by the region’s relative high buy-in prices but the performance you can tap into is undeniable.  The Burgundy 150 index is up 16.8% year-to-date, 18% over the last year and 83% over the last five.  But this is an average calculated from the performance of 150 Burgundian wines and our carefully selected individual Burgundies have smashed these figures to deliver staggering returns.

Reduced production quantities from many of the top wine-producing regions, coupled with the growing supply chain crisis is adding pressure to demand

Although the Liv-ex 1000 reached another record in September, it was the reliable benchmark Liv-ex 100 which emerged as the best performing index both year-to-date and over the last year.  We remain bullish about the market’s prospects in the coming months.  Reduced production quantities from many of the top wine-producing regions, coupled with the growing supply chain crisis is adding pressure to demand within an environment where it outstrips supply when everything is operating ‘normally’.

Leading hotels, restaurants and members clubs, as well as private collectors, are already beginning to scramble to secure stocks before the situation worsens.  This has been particularly evident in the Champagne market and with Christmas and New Year fast approaching, get in touch with us now to discuss your options and ensure that you remain ahead of the curve.

Looking Back At 2021
Scroll to top