The wine market entered 2020 full of gusto and positivity but as the bizarre events of the year began to unfurl, the market’s direction for the coming year initially looked uncertain. One thing we knew for sure is that wine had a history of performing well in times of financial stress, and this year soon became a new proving ground for this belief.

The Hong Kong disruption, US wine import tariffs, Brexit and then the Covid-19 pandemic presented unique challenges, and the global wine trade reacted by improvising and overcoming a deluge of obstacles to keep the market on track. The biggest wine trade fairs were cancelled and the Bordeaux En Primeur campaign became a mail-order type affair to keep the wheels moving. Bordeaux producers worked wonders to ensure that critics and buyers were supplied with premium condition barrel samples to allow for pre-release tastings. This, combined with some very attractive pricing resulted in the campaign being heralded as a success.

But behind all of this, prices held firm. The financial performance of many leading wines remained remarkably stable at first and then continued to rise. This is particularly true of Champagne, Italy, California and Rhone, who all saw either growth in value and market share. This was good news for our clients as these regions have been an area of particular focus for us over the last couple of years something highlighted in our first podcast episode in January 2020.

All of the major Liv-ex indices showed positive growth in 2020 with the Liv-ex Fine Wine 50 growing by 3.26% and the benchmark Liv-ex 100 gaining 4.65%. November saw the latter reach its highest level in two years, with trade by value reaching a ten year high.

As traditional investments and equities either struggled or became extremely volatile, wine stood firm and offered stability amid the growing financial storms. The wine market had once again shown unmatched stability, as demonstrated in the chart below. By the end of November, only the Liv-ex 100 and the S&P 500 were in positive territory. The FTSE and the Hang Seng were both negative and the DAX ran flat. 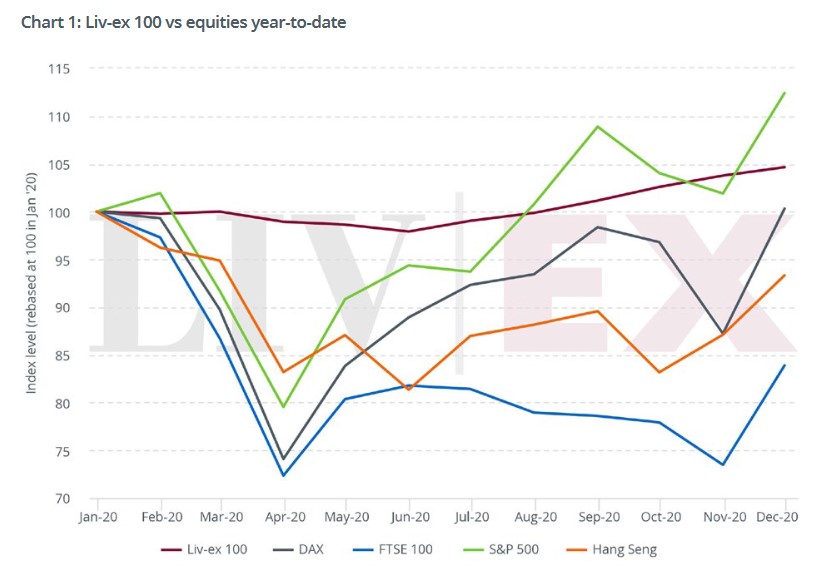 A weakening of Sterling against other currencies helped to highlight UK based wine holdings as an attractive purchase but there were also other forces at play. Wine is simply more appealing to people as an alternative asset and as central banks pumped liquidity into the global economy, investors and collectors were drawn to low-volatile, hard-assets such as fine wine.

There’s plenty of evidence to show why. 2020’s biggest price performer was Bordeaux’s Chateau L’Eglise-Clinet 2010 which grew by 37% to the end of November. This was closely followed by Sassicaia 2013 and Bollinger 2008 which saw 30.7% and 27.4% respectively. You could argue that similar performance could have been found elsewhere but probably not with the added protection that low volatility and stability can provide.

The wine market’s regional diversification is something that we have been at the forefront of for over a decade and this year we saw this broadening really take hold, with great results.

The US fine wine market is huge and American buyers have helped to drive the performance of regions outside of Bordeaux and Burgundy by side-stepping Trump’s 25% wine import tariffs.

This resulted in Champagne outperforming all other fine wine regions for the first year ever. The Champagne 50 index grew by 8.27%, bolstered by critically acclaimed releases from the 2008 and 2012 vintages. Italy, another US tariff-dodging region, gained 6.72% with collectors increasingly turning to premium Piedmont, such as Giacosa Conterno, Vietti and Gaja, names by now very familiar to our clients.

The Rhone 100 was the third best-performing regions, gaining 3.64% and although the Rhone was still subject to US tariffs geographically, many of the region’s wines were deemed exempt by having an alcohol content above 14% abv. Rhone wines have a strong following in the US, thanks to critics such as Jeb Dunnuck and Robert Parker which resulted in US-based buyers accounting for over half of region’s trade share by value.

US wines, predominantly from California, had a great year increasing their trade share from 2.3% last year to 7% at the time of writing. The Napa Valley, in particular, has provided some of the best performing wines with Harlan Estate 2016 creeping into the top ten wines traded by value this year. The USA is still very much a growing region outside of the US but we have experience and contacts, having worked with the region’s top wines for many years. The future for these wines is very exciting and we’re well-positioned to guide you through the best products as the market for them develops.

If you were looking for some positive news to end the year, look no further than the wine market. With a ‘no-deal’ scenario with the EU seeming the most likely outcome for 1st January, any further weakening of Sterling could have huge benefits for your wine portfolio moving into 2021. Next year seems very uncertain at this stage with so much hanging in the balance but the wine market has a very positive outlook and we remain committed to seeking out the best wines to maximise market conditions and deliver growth over the coming years.

The Show Must Go On | Hannah Tovey | London Wine Fair

The Price Always Goes Up | John Kapon of Acker Wines 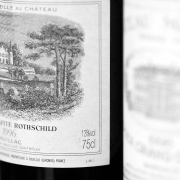