With the first quarter of 2020 behind us, we take a closer look at our Q1 best seller and its price performance within the market.

Sparkling wines from the Champagne region of France have been steadily gathering momentum for a number of years. This progress was highlighted at the end of 2019 when Liv-ex announced that three Champagnes had made the top ten performers of the year. One of those three wines, Salon’s Le Mesnil 2002, has remained popular with our customers to become our best seller of the quarter.

Just 37 vintages were produced in the 20th century, a unique phenomenon in the world of wine

Salon Le Mesnil is a sparkling white wine made from 100% Chardonnay grown in the Le Mesnil-sur-Oger vineyards. The first commercial vintage was produced in 1921 but a vintage is only declared when the quality is deemed to meet strict standards. This results in an average of around three vintages being released per decade, production is small at approximately 60,000 bottles per vintage which also helps add to the excitement each time a new release enters the market.

Salon has been held in high regard since its arrival, in the Roaring Twenties it was the house champagne at Maxim’s and has been enjoyed by high society ever since. Today Salon is globally recognised as one of the top Blanc de Blancs and although the house has changed hands several times since Eugene-Aime Salon’s passing in 1943, the quality has remained intact solidifying its place as one of the most desirable and expensive Champagnes on the market.

Released into the market in 2014, the 2002 joined a succession of well received vintages with critical acclaim. Antonio Galloni described it as “utterly mesmerizing”, Julia Harding MW found “definition, clarity and finesse” while The Wine Advocate’s William Kelley recently proclaimed the release “full-bodied, broad and powerful”.

Salon 2002 is a great romantic, but also armed for battle! Its strength and audacity give it the balance of a classical dancer

Market data from Liv-ex shows that price performance has also been good, over the last twelve months the market value of the 2002 has grown by 12.5%. Spanning back over two years the growth figure more than doubles to 30%, and taking a five year view of past performance unveils an impressive 108% gain. 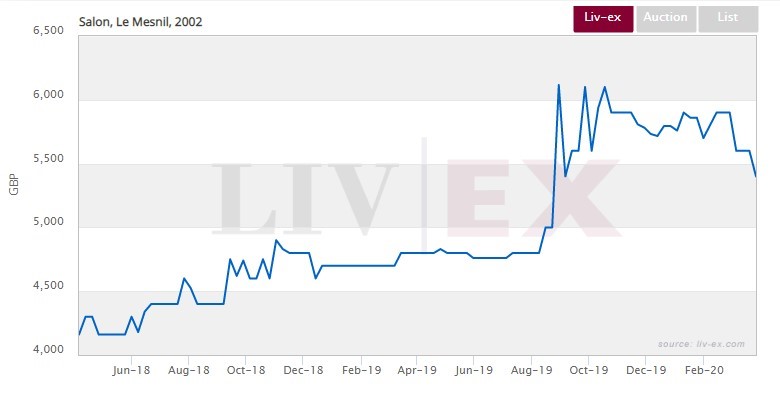 The highly anticipated 2008 vintage was released late last year, but with a twist. The latest vintage was to be released in magnum format only and limited to just 8,000 bottles in total. Sold as the ‘2008 Salon Limited Edition Oenotheque Case’, the handcrafted collector’s case contains one magnum of the 2008 and two regular bottles of the 2004, 2006 and 2007 vintages.

It is quite simply one of the most magnificent Champagnes I have ever tasted.

It’s yet to be seen how prices will react to the huge disruption to global business and financial markets that we are seeing but signs are looking good so far. The wine market has been in a state of flux for some time now with Champagne emerging as a beacon of success, alongside Italian and Californian wines. If history has taught us anything about the wine market it’s that wine usually thrives when traditional markets struggle. Additionally, once this mess stabilises there will no doubt be swathes of celebrations around the world which will require lubrication – and which drink do we choose to celebrate?

Q1 Review: Changing Shape of the Market
Scroll to top