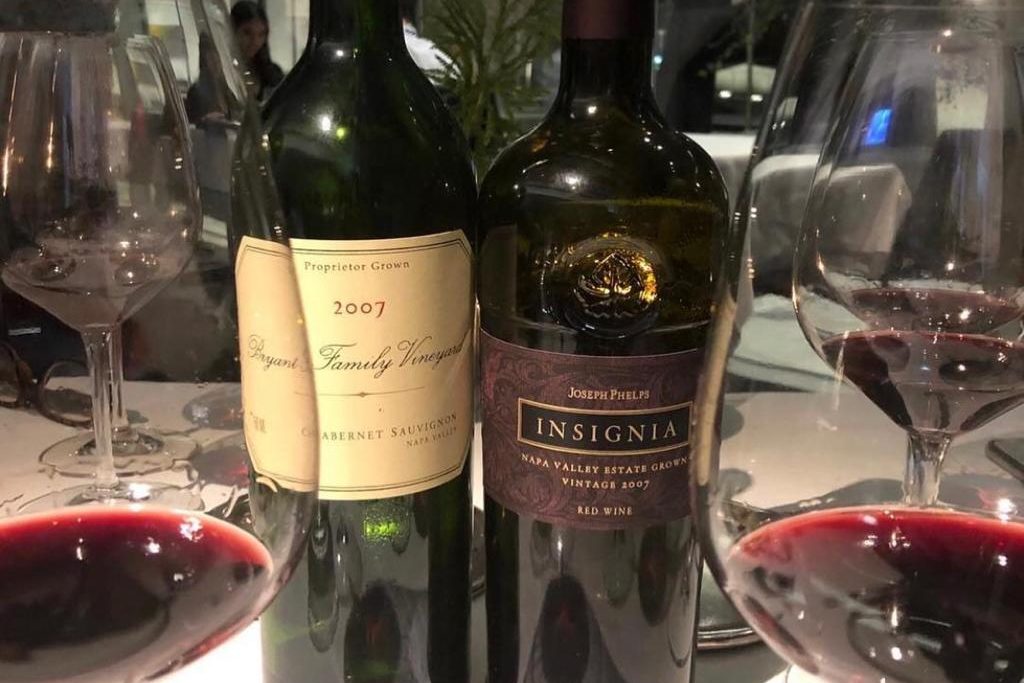 The Californian sector of the fine wine market has been getting a lot of attention this year, and for good reason. Over the last five years, the California 50 index has grown by an impressive 60%, leading many to take a second look.

Wine Enthusiast, one of America’s largest fine wine publications, recently collated their top ten Californian Collectibles and calculated their price performance over the last six years.  Ranging from established stalwarts such as Joseph Phelps Insignia and Opus One to highly collectable cult wines, such as Screaming Eagle.  Many of you will recognise these names, as we have been advocating the potential of Californian wines for many years now and it’s great to see our recommendations validated by the region’s ongoing positive growth.

Of the ten wines listed, we have supplied the top eight to our clients over the years and below we run through them one by one to highlight their history and growth.  Last year Liv-ex introduced their California 50 Index – which tracks the price performance of the last ten vintages of the five most actively traded Californian wines – namely Screaming Eagle, Opus One, Dominus, Harlan Estate and Ridge Monte Bello, and unsurprisingly there’s some cross over here too, with all five wines appearing in the top ten.

The first wine that we have recommended appears at number 8.  Joseph Phelps’ Insignia hails from Napa Valley and the first vintage was produced in 1974.  This Bordeaux Blend is made with fruit from cooler Napa sub-regions, such as Stag’s Leap District and Oak Knoll.  Insignia ages very well but its relatively large production helps to keep prices quite grounded. Nether-the-less the average six-year appreciation sits at 53%, and its global following and growing popularity led to our first Insignia recommendation in January 2018.

At number 7, the Colgin IX Estate Red and although the Colgin family had been making wine since the early nineties, the first vintage of this particular wine was made in 2002.  A great deal more attention was given to this winery in 2017 when luxury goods giant Louis Vuitton Moet Hennessy Group (LVMH) took a 60% stake.  The IX Estate Red is a blend of Merlot, Cabernet Franc, Cabernet Sauvignon and Petit Verdot grapes grown in the Pritchard Hill area of Napa Valley. Less than 2000 cases are produced in most vintages and the average six-year appreciation sits at 63%.  We first sold Colgin in April 2017 for £1,780 per six which has since grown in value by 19.5% to reach a market value of £2,128.

Harlan Estate placed 6th in the rankings and will be a name very familiar to many of our clients.  Founded in 1984 in the Oakville district of Napa Valley by William Harlan, this estate has developed from humble beginnings to become one of the most desired Napa wines on the market. Harlan has been popular since its first vintage in 1990 and its bold flavours, great structure and ability to age well have kept it at the top of collectors’ wish lists. The Harlan Estate brand has been popular with our clients since we first highlighted its potential in July 2017 and the average six-year appreciation sits at an impressive 64%.

Ridge Monte Bello hails from the Santa Cruz Mountains appellation and the first vintage was produced in 1962 – making it almost ancient in Californian terms!  In fact, number five of the top ten has the longest track record of any of the top collectable Californian wines.  The only wine of the bunch to be made outside of Napa Valley, Ridge is renowned for being firmly structured, complex and the ability to withstand very long term ageing.  Production quantities sit higher than most on this list at around 5,000 cases but this hasn’t got in the way of some very rapid growth of late, with the brand’s average six-year appreciation sitting at 67%.  However, we sold the 2013 vintage in March 2018 for £1,190 per six which has grown by an impressive 44% to today’s market value of £1,715 – just one example of why these wines are so exciting and full of potential.

Fourth place is reserved for a very special wine, Opus One  This is the first Californian wine we recommended, way back in 2010.  Back then we were offering twelve bottle cases of the 2006 vintage for £1,915 and today the same case has a market value of £3,060!  The other ‘special’ feature of Opus One is the partnership between Iconic Napa winemaker Robert Mondavi and Baron Philippe de Rothschild of Bordeaux.  This direct connection to Chateau Mouton Rothschild has helped the estate to raise its global profile and become a market leader.  Aiming to create a wine using Californian fruit and French techniques, Opus One really hit the spot with consumers and has become the first American wine to be sold through official French negociants on La Place de Bordeaux, alongside other fine wine royalty.  Production is colossal compared to other wines on the list but at 22,000 cases this only proves the power of the brand, as Opus One has still averaged a six-year appreciation of 71%.

Number 3 reveals one of Napa’s most collectable wines – Scarecrow.  We introduced clients to this winery in April 2017 via the 2014 vintage and it soon became a firm favourite.  Demand for this small production Cabernet Sauvignon is so great that there is a waiting list to get on the waiting list!  The Inglenook property was purchased in 2002 by photographer Brett Lopez.  The existing vineyard had been planted to Cabernet Sauvignon in 1945 by the previous owner, Brett’s grandfather J.J.Cohn.  Mr Cohn had been the Chief of Production for MGM and was heavily involved in the making of The Wizard of Oz.  Lopez paid homage to his grandfather when he produced his first wine in 2003 by naming it after the brave character from the classic movie.  Production sits at around 2,000 cases and the average six-year appreciation for this wine sits at 80%.

Just missing out on the top spot is Dominus.  Owned by Christian Mouiex of the famed Bordeaux wine merchant family and owners of Petrus, this is another example of French influence offering a helping hand.  Christian studied oenology at the University of California and fell in love with the region in the 1960s.  Famed for its minimalist stone winery at Napanook, the brand has demonstrated its power and finesse through consistent and long-lived, classic style wines.  We introduced a range of the very best vintages to our clients in May 2018 but keen collectors have been stocking up on Dominus for a few decades.  In recent years Dominus’ rate of growth has started to equal that of the region’s top performer, with a six-year appreciation of 93%.

Coming in at number one is the current reigning king of Californian wine, Screaming Eagle.  This highly collectable wine has been produced since 1992 from their Oakville winery in the Napa Valley.  Growing from initial annual production of around 200 cases, Screaming Eagle has changed hands and grown over the years and now produces around 800 cases per vintage.  Despite quadrupling their output, secondary market prices have remained high due to the collectable and iconic nature of the brand.  The current winemaker Nick Gislason has done a sterling job of keeping quality consistent and over the last six years, this wine has appreciated by 103% on average, a true jewel in the Californian wine crown.

Californian wine has been at the forefront of wine news over the last couple of years for many reasons – breaking auction sales records, consistent secondary market growth and, of course, the horrendous damage caused by annual wildfires.  The wine market has been broadening for several years now and one of the biggest land grabs has been the rapid rise of California’s share of trade by volume.  This has been matched by its price performance and is the reason why we have been recommending Californian wines as a worthwhile diversification for nearly a decade. 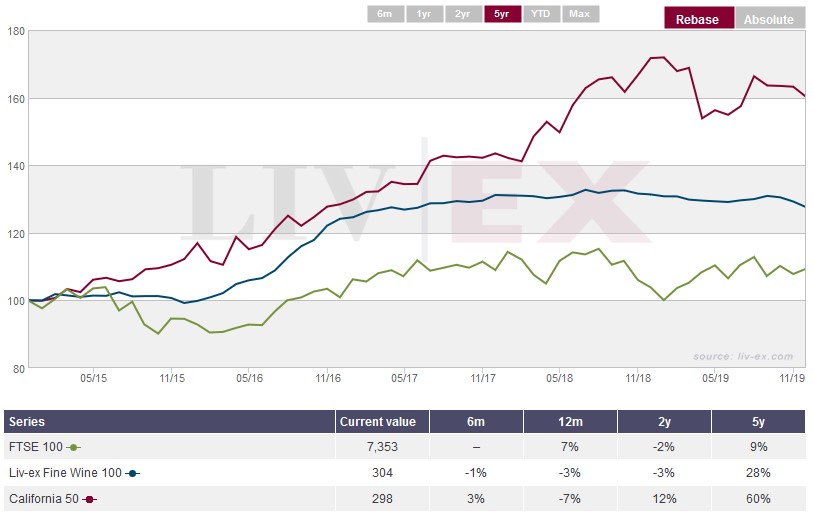 As the chart above shows, California’s top wines have outperformed Bordeaux by quite some margin.  This progress has reduced Bordeaux’s share of trade but this only reinforces our general outlook that a wine portfolio should be varied and represent as many of the world’s prestigious wine regions & brands as you can accommodate.  Regardless of the fantastic growth that these wines have shown, it’s still a sector of the market that is finding its feet globally and as a result, there remains ample opportunity to take positions at relatively affordable prices.

We believe that a healthy portfolio should have a good spread of regions.  Options will differ over what the ideal share should be depending on your financial plans and budget, but we are on hand to provide assistance interpreting the information or offer recommendations for balancing your portfolio.

California will continue to be an area of focus for us and our clients as we move into 2020.  If you would like to find out more about the opportunities with Californian wine, please get in touch and speak with your Portfolio Manager who will be happy to discuss wines that will fit your budget and complement your wider financial plans.